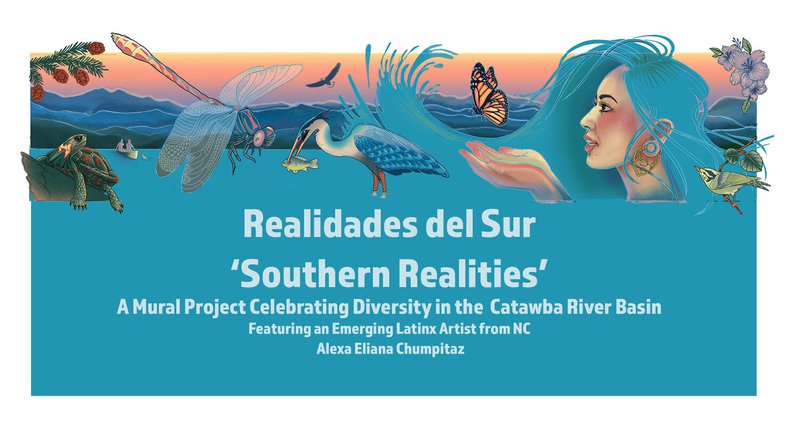 This mural project is for the northeastern wall of 212 Avery Avenue, in Morganton, NC. This initiative celebrates our local ecology to promote a deeper appreciation for the conservation and stewardship of our region. In collaboration with the North Carolina Museum of Art, this mural will promote the biodiversity of our region along with its cultural diversity by celebrating the perspective and talents of the Hispanic community in North Carolina. This mural will also coincide with student programming over the course of three years, disseminating rich curricular material around conservation, ecology, and our diverse, local culture through workshops and public engagement.

In this design, we see a woman captivated by the flight of a Monarch butterfly. This figure is part of the landscape, her hair flowing into the Catawba River, feeding into Lake James. Around the figure and butterfly, we see regional fauna and flora (their names will be written across the bottom of the mural). We find the Catawba Rhododendron, the Worm-eating Warbler, an Edmund's Snaketail Dragonfly, Carolina Hemlock, a Blue Heron, the Bog Turtle, and a Bald Eagle.

This mural ultimately pays tribute to the preservation of the Catawba River Basin and speaks to the role we play in its care. The Monarch butterfly symbolizes the power of transformation and its presence signals a time for personal or internal change, especially changes of perspective and how we perceive our place in the world.

Alexa Eliana Chumpitaz is a Latinx artist based in Raleigh, North Carolina. She works for The NC Department of Environmental Quality (DEQ), which protects North Carolina's environment and natural resources, and freelances as an artist, focusing primarily on painting, illustration, and graphic design. 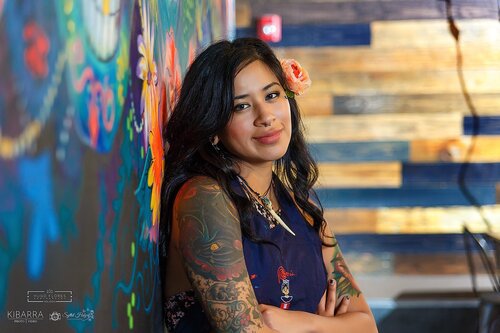 “The mural will celebrate the biodiversity of Western North Carolina, the ecology there, specifically from the perspective of a Latinx artist paying homage to the diversity of its community, with its large Guatemalan population.

The Monarch was an important element of the mural from the start. There is so much symbolism in butterflies themselves, which is why I love to incorporate them in my designs representing transformation, change, identity...plus they are so vibrant and beautiful! The migration of the Monarch (in Eastern North America making a long, migratory journey to the Sierra Madre Mountains of Mexico) is similar to the story of many Latinx families.

I so appreciate the struggles my parents went through, just so that I could have a better life here. I am a first-generation American, on both sides of my family, and my parents never hesitated to support my decision to be an artist. This mural is important, not just for me, but for others who need a vision of hope. For me, it demonstrates that you can make an impact as a Latinx-American. I want my art to engage, educate, and empower all types of people, in different walks of life, and this is why this mural means so much to me.

I wanted to create a depiction of the Catawba River Basin that brings the fauna and flora, the backyard of Western North Carolina, to the forefront incorporating the figure of a Latina woman. The figure is bringing life into the rest of the mural, her hair turning into the water. This is inspired by the culture of the Catawba Native Americans which was very matriarchal.

I chose the Catawba River because it is such an important resource spanning over two hundred miles between North and South Carolina, providing energy to a growing population with 1.7 million people depending on its resources. With that being said, in the past, there hasn’t been proper water use education, and along with environmental strains (such as droughts, climate change) and the 11 dams that are on the river, American Rivers declared the Catawba endangered, in 2008. Thankfully, communities came together and made significant improvements to decrease negative impacts on the river. I want people to know how important this basin is to the biodiversity of the region, and how we can make a significant impact on the health of our environment.”